Skip to content
Providing support and services for more than 500 children and adults with learning disabilities and their families across Cumbria.
» Who We Are» News» New High Sheriff meets our members 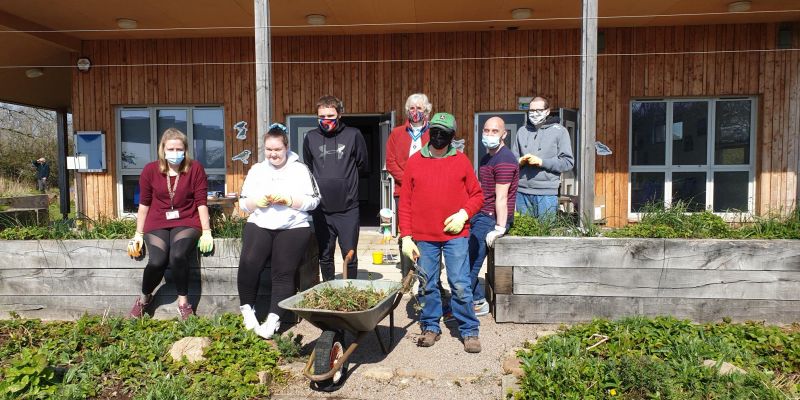 Mr Beeby, who took over as High Sheriff on March, is also the chair of the Cumbria Community Foundation (CCF) trustees and CCF fundholder, was visiting Gosling Sike at Houghton, and later the Watchtree Nature Reserve at Wiggonby, along with his partner Soo Redshaw, Jim Johnston (CCF trustee and fundholder), Valerie Young (CCF trustee and honorary treasurer), and Kevin Walsh, (CCF trustee and chair of the Mains Grants Committee).

At Gosling Sike they met several Carlisle Mencap service users, plus team leaders Dan Campbell and Rebecca Carey and CEO Sheila Gregory. Our service users often volunteer to help out on the farm and the wildlife site and recently were heavily involved in the Cumbria Wildlife Trust's Get Cumbria Buzzing! initiative which involved planting bee-friendly flowers.

Mr Beeby is a west Cumbrian businessman. He said: “Alongside my business career I have been involved in several charitable roles including Chair of The Princes Trust in Cumbria and member of the management committee at Calvert Trust. I am currently Chair of Trustees of Cumbria Community Foundation and Chair of Cumbria CBI. I am also involved in working with a small number of companies.”

He plans to use his year in office to highlight and encourage opportunities for young people to advance, be confident, committed and community minded.

You can see more photographs of Carlisle Mencap members and staff during the visit of the High Sheriff at our special Gallery on this website and also on our Facebook page.